Osun guber: My achievements will be greater if re-elected for second term – Oyetola

Osun guber: My achievements will be greater if re-elected for second term – Oyetola
TIMOTHY AGBOR, OSOGBO
The candidate of the ruling All Progressives Congress in the July 16 governorship election in Osun State, Adegboyega Oyetola on Wednesday, disclosed that if elected for a second term, his achievements in office would surpass those already recorded.
He called on the people of the state to reject any form of inducement from politicians ahead of the poll.
The incumbent Osun State Governor asked residents within voting age to consider their future and that of their children and resist politicians’ inducement and vote-buying during the poll.
Addressing party supporters in Ibokun and Ijebu-Jesa towns in Obokun and Oriade Local Government Areas respectively during his re-election campaign, Oyetola said he had achieved enough for the people of the state to allow him taste power a second time.
He said, “We are not for ‘fire for fire’ politics, we are not for pound, euro game; but, we are to uphold a good democratic system. Let us consider the future of our children, don’t give room for inducement. The future is very important.
“They are coming out to reach the people of the state once a year like a masquerader, they are feeding the people of the state with deceit. I urge you (party supporters) to reject them. Osun State should not be used as a test of governance with all the challenges facing the state.
“The civil servants and pensioners are collecting full salaries before the end of every month. With all the achievements we recorded in our first term, it is just a teaser of what we will deliver during the second term if you vote for me.
“God has answered our prayer with the next president of Nigeria, he is a core Yoruba man. Osun election is a pointer to the general election and we have delivered Ekiti, Osun is the next.
“The present government is ordained by God.
There will be adequate security for Osun State governorship election, don’t be intimidated by anyone. We are planning adequate security for the entire residents of the state for the forthcoming election,” Oyetola assured the people.
Also speaking at the well attended campaign rally, the Director General of Governor Gboyega Oyetola Campaign Council, Senator Ajibola Bashiru, reeled out achievements of the party’s flagbearer and debunked insinuation that pensioners in the state would not vote Oyetola.
Bashiru said, “Governor Oyetola came to the state with peace and development. The governor has embarked on public work by rehabilitation of roads numbering about 500 km. He has graded about 5000 km roads.
“This administration is feeding 30,000 households for the past 14 months. On education, the governor is rehabilitating schools in a way that the world accepted our approach. He recruited teachers in these schools for the students and pupils.
“He managed the resources of the state in a way that has attracted investors into the state.
“The opposition party lied that the pensioners will not vote for Oyetola. The lie has been dispelled. The challenges facing the civil servants and pensioners in the state were inherited by Oyetola who has been changing it for good. He is signing N500 million every month for pensioners.
“In 2011, they started Contributory Pension Scheme, in which government will remit its part, workers will remit their part to the scheme to prepare to save for retirees.
“In this country, only five states are paying for this which include Osun. It is a lie that Oyetola will stop paying civil servants’ salary in second term. No room for half salary again in Osun,” he said.
Meanwhile, some of the members of the Peoples Democratic Party were said to have defected to the ruling APC in Obokun Local Government Area of the state. 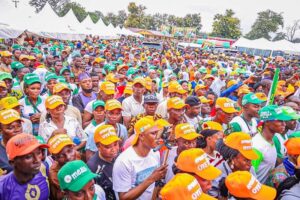 Oyetola takes campaign to Adeleke’s hometown, excited at large turnout   TIMOTHY AGBOR, OSOGBO     Governor of Osun State and candidate of the ruling All Progressives Congress in the July 16 governorship election in the state, Gboyega Oyetola has expressed satisfaction at the large crowd that attended his campaign in Ede, the hometown of […]

Tsunami of defection hits Osun PDP as thousands of party members move to APC TIMOTHY AGBOR, OSOGBO No fewer than 10,000 members of the Peoples Democratic Party (PDP) in Osun State have dumped the party for the ruling All Progressives Congress (APC) in the state ahead of the July 16 governorship election in the state. […] 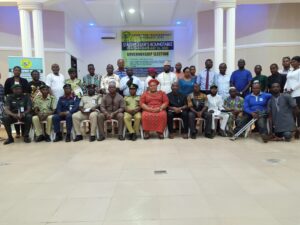 CTA holds stakeholders’ meeting ahead Osun guber election, to deploy 60 observers TIMOTHY AGBOR, OSOGBO Ahead of the July 16 governorship election in Osun State, a non-governmental organisation renowned for its keen election observation, Centre for Transparency Advocacy (CTA) on Tuesday organised a Stakeholders’ Meeting in Preparation towards the poll. The Department of the State […]